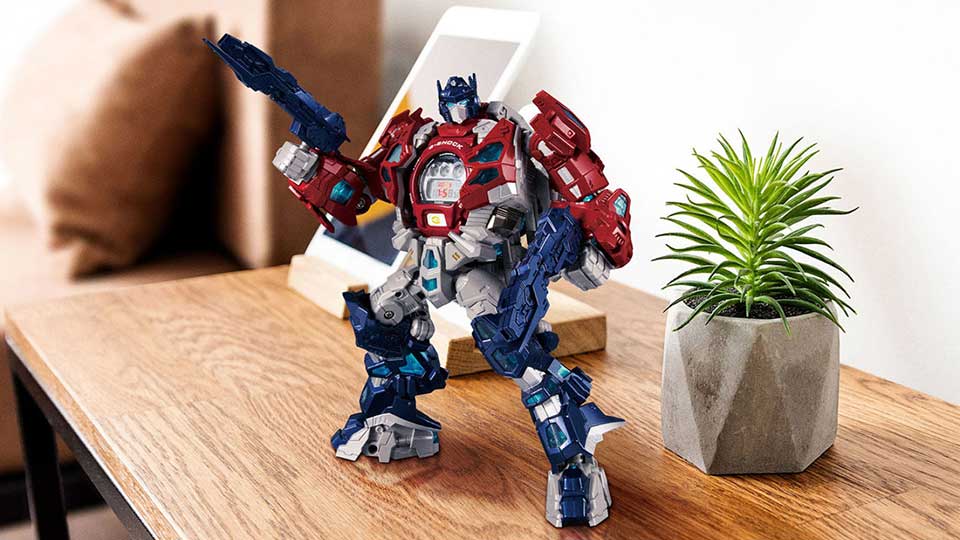 Ask anyone to name a couple of examples of Japanese futurism, and the chances are good that they might come up with Transformers toys and Casio G-Shock watches. Back when the G-Shock first appeared on my radar, I remember how its muscular profile and complex controls made it seem like a digital watch on steroids. Transformers seemed an obvious influence. But it was certainly a surprise to me to discover that these mega-successful franchises both originated in 1984.

Right on time for both brands’ 35th birthday, Tomy and Casio have issued a limited edition hybrid piece sure to cause tension between fathers and sons everywhere. Part robot, part watch and completely badass, the DW600TF-SET features a Casio watch as the pulsing heart of Optimus Prime, or a Tomy toy as an elaborate watch stand…it’s all a question of perspective. It boggles the mind to imagine how many different iterations this collaboration will generate over the coming years.

Hardly a week goes by without news about eSports spilling into the general domain. Over the last three years, the rise of tournament gaming as a sports, entertainment and cultural force has been meteoric, and the willingness of traditional sports teams and leagues to engage with it has been a big driver of legitimacy and awareness – certainly beyond the gaming audience.

This embrace of eSports by establishment names extends to brands like adidas, which views games like EA Sports’ FIFA19 as important as any other medium with a captive audience in the tens of millions. Last month, the German brand took a huge step towards merging the real with the virtual, by releasing replica versions of in-game fantasy kits to the general market. The other-worldly designs for Real Madrid, Manchester United, Juventus, and Bayern Munich represent official fourth kits, and can be earned either in-game by completing weekly challenges, or in-store, by standing in a queue.

View all posts by Gavin Brown →